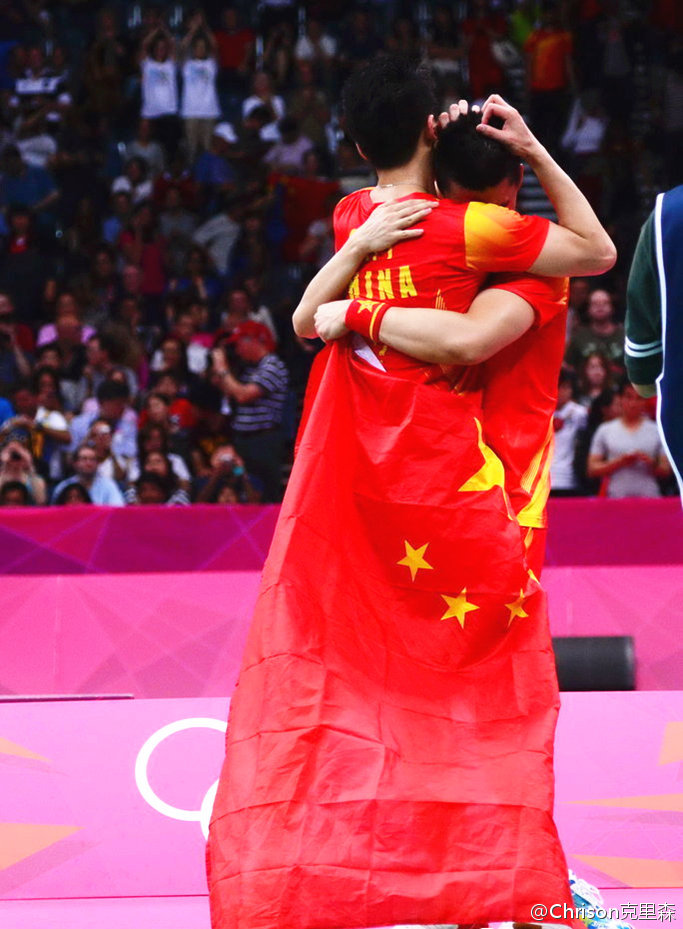 What a stunning shot.  One of my favorite shots of the Olympics.

China completed a stunning sweep of all five gold medals at the London Games' scandal-hit badminton tournament on Sunday, clinching both the men's singles and doubles titles to send red-clad fans delirious with delight at Wembley Arena.

World number one Lin Dan overhauled Lee Chong Wei in a thriller to break Malaysian hearts once again, four years after trouncing his great rival in the Beijing final.

Men's doubles world champions Cai Yun and Fu Haifeng then wrapped up the unprecedented sweep with an emphatic win over Denmark's Mathias Boe and Carsten Mogensen. 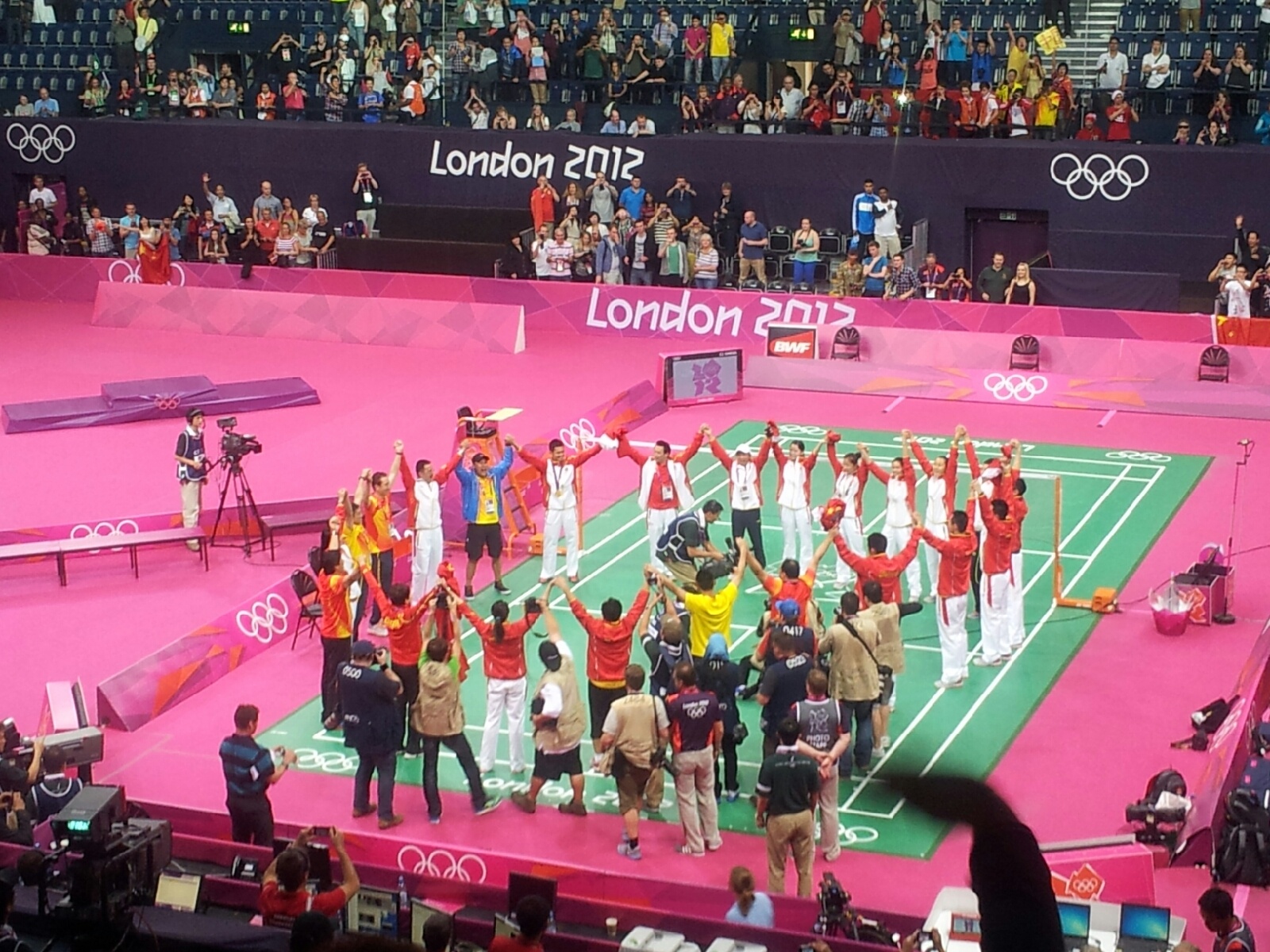 China's players and coaches flooded the court to celebrate with the men's winners, but two team members were missing from the photo-shots and group hugs.

World champion women's doubles pair Yu Yang and Wang Xiaoli were booted out of the tournament along with three other women's pairs from South Korea and Indonesia for playing to lose their matches to secure more favorable positions in the knockout rounds.

"If five golds go to China, it only demonstrates one thing, the Chinese team made their best personal efforts," Lin told reporters.

"As players we all have responsibility to achieve the best results and defeat our rivals. We don't need to consider anything else."

"Lee is such a brilliant rival. This is quite lucky for me. I treasure the opportunities to play against him. I don't know if I'll play against him in another four years but we'll see each other in Chinese badminton tournaments."

A year ago they marched in holding all five world titles and marched back out having retained them all.

While Lin was guarded about the impact of China's dominance on the sport, Lee pulled no punches.

"It is good for China, but as for the other countries, they have to work harder," Lee said through a translator.

"Other countries need to have a succession plan and they need to work harder to stop China dominating this sport." 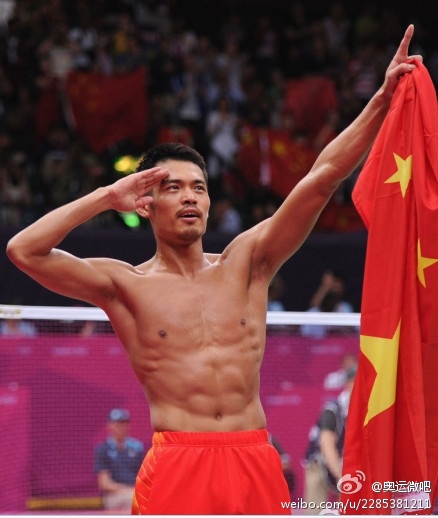 Super Dan beats his nemesis at the Olympic finals again

Lee came into the tournament scrambling to be fit after sustaining an ankle injury in May, but after surviving a shaky first round win, mowed through a succession of opponents to set up a chance of redemption against long-time nemesis Lin.

The 29-year-old Malaysian, who has held the number one ranking but never won a world or Asian Games title, was also desperate to end his nation's 48-year wait for an Olympic gold.

He came agonizingly close, pushing to within two points of victory, but made a judgment call he may regret for years when he allowed the shuttlecock to fall and clip the baseline.

That opened the door for his opponent, and with frenzied Chinese fans yelling "Kill! Kill!", the spiky-haired Lin closed out the match by winning an epic rally when Lee pushed a lob past the baseline.

Lin dashed madly to a corner of the venue to be wrapped up in a bear hug by head coach Li Yongbo, while Lee simply slumped to his knees on the court as his coaches tried to console him.

"I thank all the supporters who came all the way from Malaysia," Lee told reporters.

"I feel sorry that I didn't win gold and feel disappointed that I couldn't deliver gold to the Malaysian team."

With four out of five golds already in the bag, China's Cai and Fu completed the sweep with a clinical 21-16 21-15 win over Boe and Mogensen, the only non-Asian players to make a final at the tournament.

The gold was sweet redemption for the Chinese duo, who had charged into the final in Beijing only to lose to Indonesia's Markis Kido and Hendra Setiawan.

The Chinese pair flew out of the blocks before being pegged back by the fired-up Danes midway through the first game.

Boe began to show signs of frustration and was cautioned by the referee, but the Chinese stayed calm to take the opening game when Cai outfoxed Boe with a serve that sailed over his head into the back court.

Cai and Fu then stepped up a gear in the second game, leaving Denmark no chance of forcing a decider.

Questions about the tournament's credibility are likely to continue, with the heat still on world badminton to investigate the role of the coaches behind the eight disqualified players.

sorry ~  my little sister was messing with my computer and deleted the last post. =_=
Tags: china, sports
Subscribe