Chow Yun-fat to End the Year with 'The Last Tycoon' 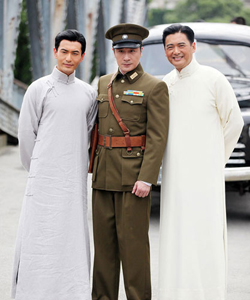 Actors (from left to right) Huang Xiaoming, Francis Ng and Chow Yun-fat on the set of the film "The Last Tycoon" [Photo: mtime.com]

Actor Chow Yun-fat says he is looking forward to ending the year in style with his film "The Last Tycoon" releasing in December.

Chow told media recently while celebrating the conclusion of filming, "This year-end is going to be a wonderful movie-going season." The season will host Jackie Chan's "CZ12", Stephen Chow's "New Chinese Odyssey", and Wong Kar-wai's "The Grandmasters".

Chow explained, "because of them, in addition to my film, the box-office derby will be very exciting."

"The Last Tycoon", directed by Wong Jing and produced by Andrew Lau, is inspired by the real-life story of a gang leader who built his empire through the 1920s and 30s in Shanghai.

A selling point for the film has largely been the cooperation between Chow Yun-fat and Huang Xiaoming. Chow made his name in 1980 for his role in the hit TV series "The Bund", and Huang took over the role in a 2007 remake.