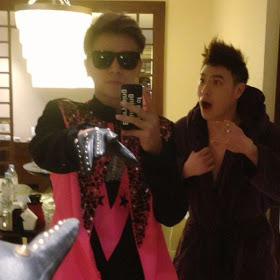 This is interesting af lol...and something I've suspected for a long time.  THough I object to "washed up singer Wilber Pan" lol.

With the tacit consent of the celebrities involved, Chinese media outlets recently have been hyping up non-existent “bromances” between male stars, few of whom are gay.

Wilber Pan published a picture on China’s microblogging platform Weibo of him holding hands with another man under a Christmas tree, accompanied by the caption: “Both of us here wish everyone a Happy New Year.”

The image, which many believed to be a coming out announcement, became a trending topic on Weibo, with many entertainment news outlets picking up the story. However, the next day he clarified that the two men in the picture were him and his younger brother.

However, many of these supposed bromances are instigated by the media. At China’s 2015 Domestic Television Series Awards Ceremony, the organizers deliberately sat two popular male television stars — Hu Ge and Wallace Huo — next to each other to hype up their friendship.

It might surprise people to read about heterosexual Chinese celebrities actively playing along with innuendos about their sexuality. After all, Chinese society is conservative, and acceptance of homosexuality is still relatively uncommon. According to a study by the Pew Research Center in 2013, only 13 percent of Chinese agreed that homosexuality is morally acceptable, 61 percent thought that it was unacceptable, and 17 percent believed that it wasn’t a moral issue.

Soon afterwards, the China Television Drama Production Industry Association released a set of guidelines specifically outlawing the inclusion of homosexual themes in television series. They placed homosexuality alongside incest and sexual perversion on a list of “abnormal sexual behaviors.”

In hyping up these celebrity relationships, the entertainment industry only seeks to draw attention and create a story. It is precisely because those celebrities are not gay — at least not publicly — that they feel comfortable pushing such stories. They neither have to worry about being castigated by a socially conservative population, nor about the possibility of being censored by the authorities.