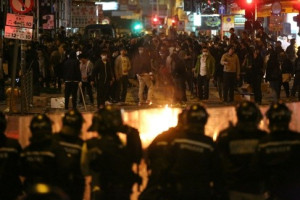 One of Hong Kong’s busiest districts was in virtual lockdown this morning after a night of violence which saw the police open fire with two “warning shots” as protesters launched missiles and set fires as a crackdown on illegal street food hawkers escalated into what some witnesses described as a ‘riot’.

Mong Kok, the scene of some of the worst unrest during the Occupy protests in 2014 , remains tense as unidentified protesters – a signficant number of them so-called ‘localists’ who campaign for varying degrees of independence for Hong Kong – launching sporadic brick and bottle attacks on police, who retaliated with pepper spray.

Fires were also reported to have been lit in the area surrounding Shantung and Soy Streets. The government has advised motorists to avoid the area.

( Collapse )
Still trending on twitter. The videos are disturbing.
Collapse