For Biotherm Homme once again!! 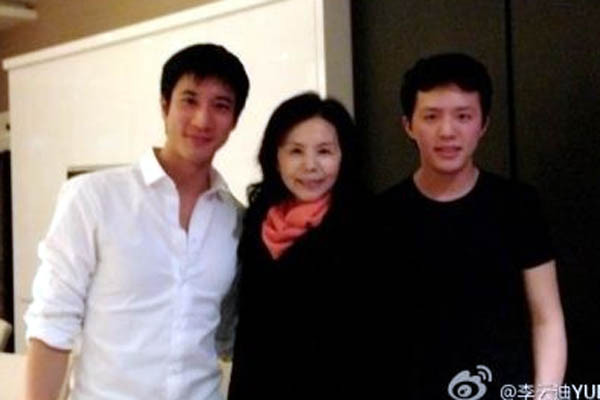 Thanksgiving with the parents

For months, pop singer Leehom Wang (王力宏) and pianist Li Yundi (李雲迪) were rumored to be more than just friends. Fans of both parties actively supported the couple, dubbing them as “Hongdi.”

Both Leehom and Yundi did not speak out to deny the rumors when they first began circulating in October 2012. Last month, Yundi finally denied the “Brokeback” accusations in an interview, but admitted that he was not annoyed with them, which may be the reason for why it took so long for him to come out and clarify.

On December 31, Yundi performed Leehom’s “Falling Leaves Returns to Roots” <落葉歸根> at a New Year’s Eve concert in Beijing. Although Leehom was not a guest performer that night, his photos were pictured on the concert’s broadcast screen during the chorus of the song, sending fans into a frenzy. Some supporters of the Homdi relationship exclaimed that Yundi was finally confessing his love to Leehom. A netizen commented, “Artists’ confessions are really amazing and romantic!”

Leehom finally broke the silence on January 3, in a Weibo post, explaining that he and Yundi are not a romantic couple. Leehom wrote, “I originally did not want to write this Weibo post because I found it unnecessary! But there has been more and more news on it recently, so I’ve decided to write this myself so others will not be misguided. I am heterosexual. Li Yundi also likes women.

“Exactly how far does this ‘Homdi’ go?! Maybe it’s just a joke, just for entertainment, but I hope everyone will be able to tell the difference between truth and nonsense! Sorry, I am a very straight."

Lol.  What happens when media takes fan ships too seriously

Super Junior-M will be making a return with “Break Down” much to the excitement of fans, and ahead of the upcoming reveal, they’ve revealed a new photo and the release date for their new album!

The charming men will be unleashing their 2nd full length album ‘Break Down’ including the title track of the same name and the music video on January 7th through Chinese music sites as well as Korean music sites, and are expected to gain immense attention from fans from all over Asia as the rest of the world.

The unit has already unveiled the music video teaser as well as a teaser photo sparking interest from those who have awaited their return since the last mini album released back in 2011! So make sure to check those out if you haven’t done so yet here.

Along with the release, Super Junior-M will also be holding a press conference in Beijing to announce their upcoming promotions before kicking off their activities in China.

Not particularly fond of these hairstyles... But I do look forward to seeing them on Chinese/Taiwanese variety shows :D
Collapse