10 years after Triumph in the Skies, TVB decided to make a sequel and held a press conference yesterday at CCTV's 2012 China International Film & TV programs Exhibition in Beijing. The cast including Myolie Wu, Fala Chen and Kenneth Ma were there to promote the series. 12 other TVB series for 2013 were featured at the exhibition as well, including Beauty at War, Rosy Business 3, The Hippocratic Crush II, Transfer of Love Firm, The Days of Days, Food for Slave, etc.

When speaking of being part of the same TV series after 10 years, Myolie Wu felt emotional, she said: "So meaningful, I've matured both in and out of the series." In TITS2, Myolie plays a new role named Summer, who is completely different from Zoe from the first season. She expressed: "Zoe is very nosey and optimistic. Summer is rather quiet, but is very serious about her relationships." Myolie reveals she and Ron Ng will develop a relationship, "At first, he thought I was his sister-in-law, but later developed feelings for me." Because the cast and crew were filming in locations such as Sanya, Taiwan, England and France, Myolie exclaimed it didn't feel like work, it felt more like a vacation.

Fala expressed when she accepted this series, the first thing she did was watch TITS and eventually turned into a faithful fan of the series. In the series, Fala takes on the challenge as the female pilot. She frankly expressed for her best performance on this role, she did a lot of research to gain professional knowledge on this field. She said: "I tried to use those special terms as much as I could, so I don't get them wrong." Also, she exposed she and Francis Ng develop an ambiguous relationship, "I had a pleasant collaboration with him, I learned a lot." Kenneth Ma's Mandarin wasn't too good, so he didn't speak as much. He only said there are a lot of relationships in this series.

Jang Keun-suk is the only K-pop artist to have secured an invite to the annual year-end concert hosted by China’s Hunan TV.According to Tree J Company, Jang will perform on the show that is aired on 16 channels throughout China and was also last year’s most-watched New Year special in its time slot.On Monday night, Jang will take to the stage in China along with his collaborator Big Brother (together they are Team H) to sing a total of three songs.Unlike last year when an array of K-pop acts performed, Jang will be the only Korean representative.The artist, who refers to himself as the “Prince of Asia,” seems to have convinced enough Chinese of the title as he has a huge following there.Back in June when he appeared on the famed talk show “Happy Camp,” also broadcast by the Chinese satellite channel, the show was the most-viewed program in its time slot.He is currently celebrating his 20th anniversary in the industry.JoongAng Daily 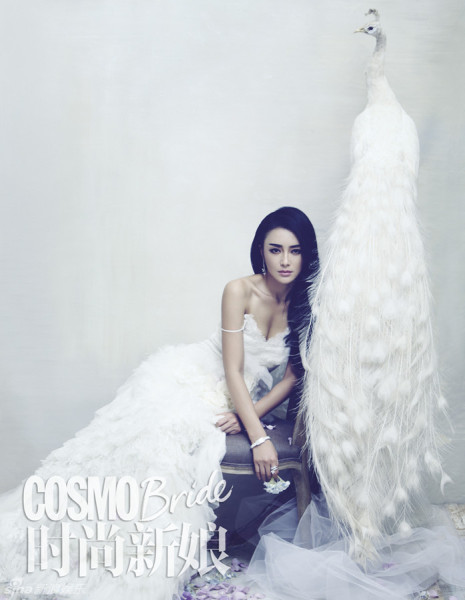 How Can Liu Bang cheat on her?

Doubling as Empress Lv in both film "The Last Supper" and drama "The Legend of Chu-Han", Qin Lan does a stunning white peacock themed shoot for Cosmo Bride.