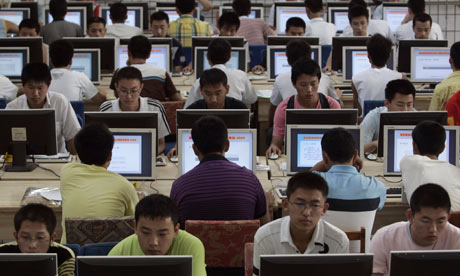 What did China search for in 2012? It wasn’t the hotly disputed Diaoyu Islands or the widely-watched London Olympics.

On Baidu.com, China’s homegrown search engine commanding about 83 percent of the Chinese search market, the most popular searches focus on stories discovered and spread by Internet denizens themselves. Chinese web users were not only passive consumers of news and entertainment, but also active investigators increasingly suspicious of the official storyline. Common themes included skepticism of government and sharp-eyed scrutiny of officials and their families, but also a keen appreciation for light-hearted and unusual stories.

The searches that set the Chinese Web ablaze

The below search terms climbed the fastest in 2012. While their total traffic wasn’t necessarily the highest, they drew the most attention in a short span of time.

#1 Bo Gu Kailai
Not surprisingly, China’s biggest political scandal in years–the downfall o Bo Xilai nd his wif GuKailai–topped Baidu’s trending list. It was the stuff of spy movies: A British man found dead in his hotel room, a night flight to the U.S. consulate, an intelligent, high-powered woman, and millions of dirty RMB changing hands. It all culminated in a murder trial for Gu and expulsion from the Party for Bo, who had once seemed assured of a place in China’s leadership.

Starting with the defection of Bo’s former right-hand ma Wang Lijun n February 2012 (also ranking #1 in Baidu’s list of most popular “Social Searches,” Baidu’s category for searches related to politics, the economy, and other social issues and culminating with Bo being stripped of all titles and power in September (#3 in Social Searches), the political upheaval allowed a rare glimpse into the enigmatic shadow puppetry of Chinese politics.

So who exactly is “Bo Gu Kailai”? It’s an odd invention by Chinese mainstream media, a convenient shorthand to refer to wife Gu, who per Chinese tradition kept her surname, while also linking her to hubby Bo.

Subsequent reports revealed that the supermarkets had not carried the products in the first place. In fact, Yili stopped exporting its milk in 2008–a suspicious detail in and of itself–but the damage had been done. Monmilk and Yili shares plummeted. The source of the rumors? Some suspected an unscrupulous competitor.

#3 From old mother to young lady

#4 CCTV’s goof of Liu Xiang’s injury
Many were already skeptical that an injured right foot was what really caused 2004 gold medalist hurdler Liu Xiang to withdraw from the London Olympics’ 110 meter hurdles. When a China Central Television (CCTV) interview showed Liu with a cast on hisleft oot, suspicions spiked. CCTV explained (plausibly, it turned out) that editors had flipped the image for aesthetic reasons.

#5 Girl dreams of time travel, gets cheated
With a string of popular time-travel themed-television series saturating the airwaves, young women all over China have dreamt of journeying back to the Qing dynasty and falling in love with a power-hungry prince (or two). One 19-year-old from Liaoning Province tried to make this fantasy a reality when she paid RMB 1,800–her entire savings–to a woman she met online to purchase a magic wine that would take her back to the past.

The best of the rest
Various popular memes and scandals rounded out the top ten. These include a young woman (#9) who threw her government-employed father-in-law’s integrity into doubt when she showed off images of luxury handbags, shoes and watches on her Weibo account. At #10, another woman became an instant celebrity after cameras caught her napping in the audience at the 2012 Spring Festival Gala, an annual variety show that is the most-watched program in China, an thus the world. Web users praised her honest reaction to a show regarded as steadily declining in quality.

Crime and criminal were also reoccurring themes.Justin Lee #2), son of a wealthy Taiwanese businessman and already known for promiscuously dating models and stars, was indicted for drugging and raping many more women. The lat Bai Jin (#3), once a popular actress, was found dead in her home following her husband’s suspected murder-suicide in February 2012, whil Bo Xilai and Gu Kulai hared the #4 spot. Mr Zhou Kehua at #6, was suspected of perpetrating a series of armed robberies from 2004 to 2012–a rare feat in a country with strict gun control. After a four-day-long pursuit ended with police fatally shooting Zhou, many netizens parsing images of the deceased questioned whether police had killed the right man.

In a self-referential twist Du Niang literally, “Lady Du”) came in at #8. Du is a pretty, young woman who serves a de facto ascot for the Baidu search engine. While Lady Du sprung from netizen imagination, she was ultimately adopted by Baidu itself.

Refreshingly, a few ordinary (and non-invented) citizens made it on to Baidu’s list of trending people Zhang Lili at at #6. Zhang is a high school teacher from Heilongjiang province who jumped in front of an oncoming bus to push several students out of danger. The students were saved, but Zhang lost both legs in the accident.

Another ordinary citizen Wu Bin as driving a long-distance bus down a highway when a piece of metallic debris flew through the bus window, stabbing into Wu’s abdomen and causing severe organ damage. Wu managed to bring the bus to a safe stop, apply the handbrake, evacuate the passengers, and call the police before finally collapsing. He died of his wounds on June 1.

It’s revealing tha diaosi 屌丝) may be the single most popular Internet term created in 2012. Enough people were using it–or at least wondering what on earth it meant–to make it the most-searched entry on Baidu, China’s Wikipedia equivalent.

Diaos has emerged as a term of self-mockery, in direct contrast to the idealized “tall rich handsome” (gaofushuai man and “pale rich beautiful” (baifumei)woman. The typica diaos of popular imagination is poor, short and ugly, spends much of his time online, generally has dreams and ideals but is too passive to pursue them, and has few expectations for the future–a kind-hearted, bumbling loser. Many Web users see a bit o diaos reflected in themselves and have embraced the term willingly, realizing how difficult it is for the ordinary person to succeed economically and romantically in China’s competitive, materialistic, network-based culture.

Other popular encyclopedia entries on Baidu include the Baryon number (#3, a concept in quantum mechanics), Gangnam Style (#4), and popular singing competition Voice of China (#5).

Baidu also tabulated its most popular questions from 2012. Some highlights:

Titled Secret <天机>, the lyrics is co-written by Mayday's A-shin and Magic Power's vocalist, Ting Ting (廷廷). The song is hitting a note high with A-shin lending his vocal power. The piece is a fabulous mixture of rock, classical and rap music which makes the song feels like a dramatic art piece.