Yesterday Psy's Gangnam Style has already reached 400 million views (and is #2 on Billboard's Hot 100). Psy's 'horse-riding' dance has become his signature and intimated all over the world. Leo Ku and Ekin Cheng were chatting one day and suddenly had an idea. They invited TVB variety show producer Wilson Chin to be the 'HK Version Psy' and the three good friends directed their own version Hong Kong Style together. The HK version added riding on the trolly bus and MTR subway, going to the racecourse to buy lottery tickets and other HK elements. As the three have very good relationships in showbiz, Eric Tsang, JJ Jia, Chin Kar Lok and Jerry Lamb made special guest appearances. Whether if its the looks or the body figure, Wilson and Psy look very much alike. Although he appeared stiff in his dancing, the clip was uploaded on Youtube and got a wave of positive feedback.

The lip-sync was kinda bad or not there, but the elevator dances are high-larious lol 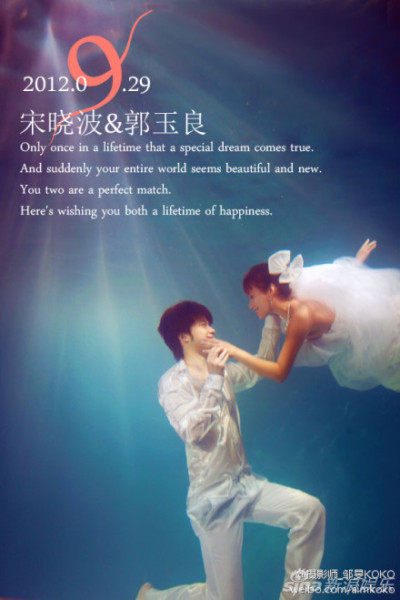 Song Xiaobo, “The Silent Angel”, recently got married to his girlfriend of 8 years Guo Yuliang.

The deaf-mute couple met in 2004 when Guo Yuliang entered the Miss Shanghai 2004 Beauty Pageant despite her disability; later in 2009 Guo Yuliang won the popularity vote for TVB’s Miss Chinese International Pageant. “I first heard of her in 2004 when she was participating in the Miss Shanghai Pageant. I was surprised at her courage and bravery to enter the competition; it touched my heart. She is hearing impaired like me, but she had the courage to compete – I wanted to meet her.” Song Xiaobo contacted the pageant organizer who were able to arrange a meeting between Song Xiaobo and his future wife. Guo Yuliang was equally touched when Song Xiaobo entered “My Hero” talent competition. “He’s always trying to prove his love for me, and entering the competition was part of that.” The newlywed are hoping to have a new addition in the family as soon as next year.

Fellow “My Hero” contestant Purba Rgyal (The New Wulongshan Bandits) was chosen to be the best-man of the wedding. Also in attendance is singer-actor Jacky Xue Xue Zhiqian and Rose Ni Ruisi (Princess is Getting Married).