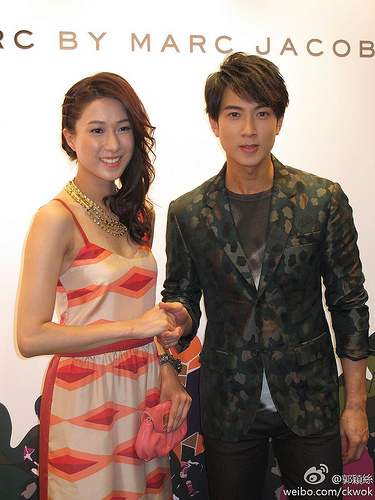 Taiwan's handsome guy Wu Chun and Linda Chung, who is said to resemble him, both attended an event for the fashion brand Marc by Marc Jacobs. Wu Chun thinks that he and Linda have a slight resemblance: "Before, when filming a movie with Raymond Lam, he also said that there's a resemblance. Even Ekin Cheng said it before!" As for Linda hoping to group with him to sing a song, he said, "Must wait a little longer first. Currently busy with filming movies. If it's the theme song of a movie, can also duet!"

Linda Chung and Taiwan's handsome guy Wu Chun, who is said to resemble her, both attended an event for the fashion brand Marc by Marc Jacobs. She frankly said that she felt nervous and excited, describing it as 'heart-pounding' and saying that her nose, chin, and small lips resembled Wu Chu the most...frankly saying that she must get a self-taken picture with him. She hopes to group with Wu Chun to duet or portray brother-and-sister roles. Asked whether she would make a self-recommendation, she said, "I am very passive; however, after seeing him, may suggest it!"