46 year old Shirley Kwan has a 10 year old son (Kwan Chun Yin) and she has always been emotionally unstable. Recently it was rumored she's making a comeback in the music industry, and signed with a new record company for HK$3 million. As her career starts moving upward again, yesterday Shirley suddenly wrote on Facebook at 4am: "I want to commit suicide!"

In less than an hour, Shirley posted another 200 word farewell letter: "I don't want to live! I know whether the cup of water is cold or hot without being told! I have no regrets. Everyone. Music industry, friends, colleagues! Family, reporters! I can make this decision and I won't look back. I no longer want to see anyone who has fate with me in this life. Except for my son." Her message seems to imply her thoughts of suicide. People are guessing its because of the rumor that her contract with the record company didn't work out, so she's feeling down from the obstruction in her career.

In Shirley's 'farewell' message, she implied she was betrayed: "Whoever betrayed me is the person who is worthy of my respect. My mind is clear! I will no longer suffer from unfair treatment! I don't want to see them again! Look out for yourself." 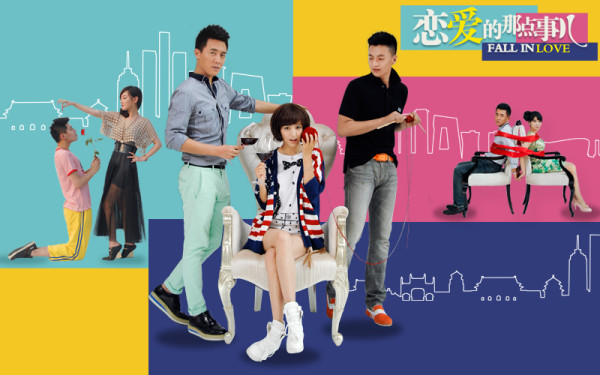 Sporting a short bob now, Tong Liya looks much more chic in Fall In Love than she has ever before. The stills below the cut dress her in vibrant colors and promise that at some point in the drama, Du Chun will be hospitalized and Tong Liya will wait in the hospital for him. Other members of the cast include Zhou Yiwei, Xue Jianing, Ma Qiuzi, and Xiao Haoran.

In real life, it’s Tong Liya’s actual boyfriend and co-star from Beijing Love story, Cheng Sicheng, who looks out for Tong Liya. While the drama was filming, Cheng Sicheng constantly visited the set to treat the cast members out to lunch – and then finished off each meal asking them to take care of his girlfriend. Aw.

During the film's premiere in Hong Kong two days ago, Li said compared to acting in various scenes in the movie, reciting her lines in English was a big headache, as many words were unfamiliar to her.

"I was worried about the sudden changes in the lines at the shooting site," Li said. "I felt insecure because I was not able to remember some words"

Talking about the film's action scenes, Li said, "I've been involved in many domestic action films. Kung fu masters such as Jackie Chan, Jet Li and Michelle Yeoh all taught me before. It's a piece of cake for me."

Li also said that in the beginning she did not pay too much attention to the producer's invitation to join the cast of "Resident Evil."

"I am not familiar with computer games or the role of Ada Wong," she said, referring to Ada Wong, a spy in the game. "Plus, I also got an invitation from 'Expendables 2.'"

Li said although she auditioned for "Resident Evil" at the last minute, the the process went smoothly.

The film is scheduled for release on the mainland on September 14.