TAIPEI: Taiwan police on Friday arrested 12 people who allegedly circulated a collection of leaked videos and photos of Taiwan playboy Justin Lee, engaged in a variety of sex acts with over 50 women, including a number of celebrities and models, reported Taiwan media.

The photos and videos were allegedly taken by Lee after he drugged the women, with Lee currently on trial over the allegations.

The 12 people, who were aged between 20 and 40, came from all walks of life – among them were a chef, a software engineer, a salesman along with a student – and were booked for spreading lewd materials as well as violating privacy laws.

They all told police that media reports on the issue had made them curious to see just what the fuss is about, which caused them to seek out and share the racy photos and videos via peer-to-peer file sharing programmes.

The Taiwan police conceded that the arrests, the results of a massive operation which saw 50 police officers raiding the homes of the 12, were too little too late.

The police expressed that this operation cannot stem the spread of the racy videos and photos, or reduce the harm it causes to the women involved, but said it will serve to "educate people that spreading lewd materials is against the law".

The Hong Kong star shares his touring experience in London, saying that he feels free when no one recognizes him on the streets

Fifty-year-old actor Andy Lau apparently enjoyed visiting London for the Paralympic Games so much, that he spent the next three days after his return to Hong Kong updating his official website with tales of his adventures abroad. Despite all the exciting activities London has to offer, Andy said that one of the highlights of his trip was the simple joy of walking around without being recognized.

Originally, Andy was scheduled to watch the actual event, but unfortunately, he missed it after landing late in London. In spite of the setback, he seized the opportunity to stroll anonymously through the streets. He wore a shirt, jeans and a pair of sneakers, and carried a backpack as if he were like any other tourist.

When asked if the bystanders did double takes, he happily answered, "It's rare that I have the opportunity to walk around like this downtown!"

He ran to a bus stop and surprisingly, nobody even turned to look at him in the eye. This was in sharp contrast to the usual mobbing he experiences from the media and his fans.
As a joke, he posted a photo with the caption, "Nobody noticed me at the bus stop -- are they looking down on me?!"

He said that the most memorable moment out of his trip was that he got to stand the very place where deceased pop legend Michael Jackson wanted to hold his concert. Of course, Andy snapped a photo of the locale for remembrance's sake. 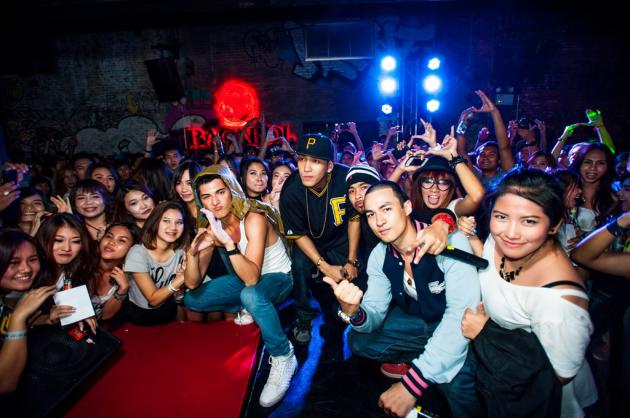 The hip-hop duo head off on a nationwide tour

Southside, the hip-hop duo under Thaitanium Entertainment, is currently entertaining hip-hop fans all over the country with a concert party tour sponsored by Bacardi.

"Boyz Plus The Hoods" kicked off at Demo in Thonglor Soi 10 at the end of last month before moving on to Picasso in Phitsanulok, Bon Bon Club in Nakhon Sawan and Marina Club in Tak.

At the Demo party, Southside's Pitawat "2P" Pruksakij, two-time winner of the MC Championship of Thailand in the Soda Singha Battle of the Year, and Thai-Italian Federico "Freddy V" Vassallo, played cuts from their debut album, "Welcome to the South", among them the electronic-led "Wai Rue Pao Bebe" and "Sorry" featuring Chin Chinawut.

"It is a concert party for people who love hip hop music and Bacardi Plus. I think Southside are great," says Sanit Sopitgirapast, senior brand manager of Bacardi Thailand.

The duo are now back in Bangkok and will perform at Safe House on Thursday and Deep on Friday before heading to Phuket where they have dates booked at Seduction on September 20 and at Kor Thor Mor on September 21.

Faced with tens of thousands of protesters contending that a Beijing-backed plan for “moral and national education” amounted to brainwashing and political indoctrination, Hong Kong’s chief executive backpedaled somewhat on Saturday and revoked a 2015 deadline for every school to start teaching the subject.

But the protesters were not mollified, demanding that the education plan be withdrawn entirely. Crowds of young people in black T-shirts continued to pour into the plaza and streets around the local government’s headquarters on Saturday evening after Leung Chun-ying, the chief executive, offered the compromise.

Mr. Leung said he wanted each school to decide whether to teach the subject in the coming years, an arrangement that could allow Beijing’s allies to press principals who do not want it.

“We just want to cancel the whole subject,” said Sam Chan, a 19-year-old community college student. “People want to protect our future and our sons’ futures.”

A very large crowd, estimated at 120,000 by organizers and 36,000 by the police, had formed on Friday evening, and many protesters spent the night.

On September 10th, it was announced that worldwide renowned Chinese actor Tony Leung Chiu Wai is going to star in his first Japanese movie. The movie is titled ‘1905‘ and will be directed by Kurosawa Kiyoshi, who also already made a name for himself around the world, especially as a master of the J-Horror genre.

This movie, however, will be a large-scale action production set in Yokohama in the year 1905, and the filming will occur both in Japan and Taiwan. It will also feature the Japanese actors Matsuda Shota and former AKB48 member Maeda Atsuko. Although it’s an ambitious Japanese production, around 90% of all lines will be in Chinese.

Concrete plans for this project were already made back in 2009, when Kurosawa and Tony Leung met and talked to each other for the first time at the Asian Film Awards. Soon after that the actor came to Japan and they were able to discuss their plans in detail. Distributor Prénom H revealed that they’ve actually been trying to get the Chinese actor on board of a Japanese production ever since they began distributing his movies in Japan with ‘Days of Being Wild‘ in 1990. In London, China won medals in 14 Paralympic sports and gold in 12 of them. Athletics (86 medals) and swimming (58 medals) contributed more than half of all China’s medals.

In the past 12 years China has increased its total medals won at the Paralympic Games in comparison to its major competitors. Indeed at London, China’s 231 medals saw it more than double it’s nearest rival (Russia, with 102).

Russia too has managed an increase in the number of total medals won in the past 12 years, while Australia and Great Britain have seen their numbers decline.