Wei Chen - Love is only compete with you 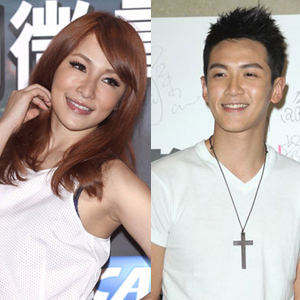 Elva Hsiao, who has always claimed that she was just friends with Kai Ko, was spotted in Bali with the actor recently.

This, hot on the heels of rumours that Malaysian tycoon Liu Dezu is courting her.

On August 27, the video of Dezu reportedly proposing to Elva started circulating widely on the internet and garnered attention for its extravagance. Following that was speculation that he had previously announced his love for her in a newspaper ad in September last year.

Liu Dezu has labelled the video "a romantic dinner" while Elva's management claimed that she only treats Dezu as a younger brother.

On the other hand, Elva and Kai were spotted in Bali on August 27 taking a stroll on the beach. Elva was clad in a bikini. Kai reportedly put on his hat and sunglasses when he was spotted and quickly walked away. The two did not respond to the rumours directly except for ambiguous updates on their personal social media sites.

Elva updated her micro-blog, sharing, â€œI work hard to spend each day well, to stay firm in my beliefs, let everyone around me be happy and to treasure everything around me. What I want is a passion towards life and to be someone who bravely faces life.â€ Her words have raised speculation that she is indirectly addressing the rumours surrounding Dezu and her.

On the same day, Kai updated his Facebook status, expressing, "Treating work with sincerity, treating the world with kindness to make myself proud of myself". The similar tone of their updates has sparked rumours that the two are in a relationship.