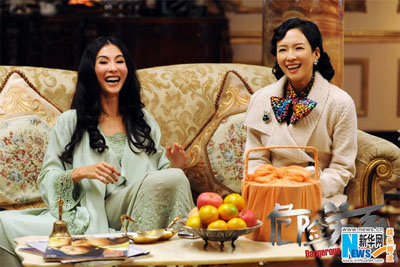 Chen Weiming, the producer of "Dangerous Liaisons" yesterday dispelled the rumor that the two lead actresses in the upcoming film adaptation of the famous French novel of the same name were at odds with each other, the Beijing Times reports.

Although Zonbo Media,the production company behind the film, has started promoting "Dangerous Liaisons," actress Zhang Ziyi has never attended any promotional events. Although Zhang previously said she was busy filming Wong Kar-wai's "The Grand Masters," rumors began to circulate that her absence was due to her chilly relationship with Cecilia Cheung, the other lead actress in the movie. Some reports said Zhang had been in a very bad mood since they started filming "Dangerous Liaisons" because she believed Cheung had stolen her thunder.

But Chen said the reports were false.

"As far as I can see, they are really good friends," he told Beijing Times, referring to Zhang and Cheung. "They have known each other since 2000 when they did Tsui Hark's 'The Legend of Zu.' This is the second time for these two to work on the same project."

In the meantime, Chen called for benign competitions among the players in China's film industry. He insisted that Chinese filmmakers stick together rather than spread rumors about each other.

Pham Quoc Khanh pocketed a silver medal in the men’s nangun event after being defeated by Kim Tae-ho from the Republic of Korea.

After four days of competition, China is leading the taolu event with 11 gold medals, followed by Vietnam with two golds, five silvers and two bronzes.

Produced by Yee Tung-Shing and starring Hong Kong megastar Nicholas Tse as well as veteran actor Lau Ching Wan, the film wastes no time telling the thrilling mystery of the so-called cursed "ghost bullets" legend. The story takes place during the Republic of China (1911-1949) and sees a serial killer going crazy inside a weapon factory.

The delicately designed plot filled with horror, suspense and tension, will keep audiences on their toes and wondering what is really going on right until the end. The unique and cold-tone cinematographic style creates several dream-like but cool scenes and the clattering sound of bullets plus the background music form a brilliant addition to the movie's scary factor. However, the autopsies and corpses in the film are sometimes a little too much for young children. China doesn't have film rating system yet, so now you have been warned.

Thank you Admiral Obvious of the Royal Pointing Shit Out fleet, but no really, I can't wait for thissssss