➤ Welcome to the weekly free forum post.  Here you'll find the week's Top 5 News Stories, any comm announcements and a list of celeb birthdays for the week.  This is also an anything-goes post.  Comment on the news, wish your fave a happy birthday or go completely off-topic, as long is it isn't against general comm rules.  Post will be made every Thursday.

✦ follow our Twitter for quick updates and join our Last FM for plenty of Chinese music recs.
✦ Olympic coverage is in full swing!  Posts must be tagged 'sports' and the respective country.

If there are any birthdays not mentioned here between August 5th and August 11th, please let us know in the comments.

About 60 models and celebrities, including some A-listers, were filmed having sexual intercourse with a second-generation-rich Taiwan playboy.

In the files from the playboy pervert’s computer, police found that 10 of the women were unconscious during the lovemaking process. It is suspected they may have been drug-raped.

Justin Lee (李宗瑞), the son of Yuanta Financial Holding’s director Lee Yue-tsang (李岳蒼), has been put on the wanted list but investigators worry he might flee to the US as he also holds a US passport.

The 27-year-old is an infamous party animal and loves showing off his wealth at night clubs.

He has often been seen French kissing models and celebrities at pubs in Taipei and elsewhere on the island.

But they all flatly denied they had anything whatsoever to do with him.

Model-actress Maggie Wu (吳亞馨), the only celebrity who admits having dated him, claimed she lost contact with him many years ago but did not respond when asked whether she was one of his sex film victims.

Terri Kwan‘s (關穎) management company, on the other hand, threatened to sue Next Magazine, which put a group photo of Justin, Terri and several unknown females in its story, leading the public to suspect Terri might be one of Justin’s sex slaves. 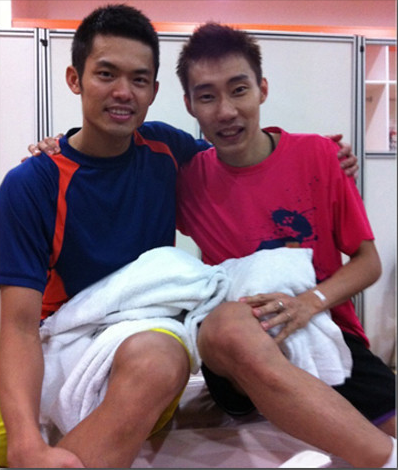 "In these four years, people around me came and go, but only you are still waiting for in the same place, no matter how much pain was endured and how much bitterness was swallowed." - Lin Dan on Lee Chong Wei


Lee Chongwei recently revealed at the airport that her future bride is going to be fellow Malaysian badminton player Wong Mew Choo.    Earlier this month, he had revealed he would marry next year and tell people who it is after the Olympics.

Previously, fans has already seen  seen Wong with Lee's mother watching him at the Olympics.    Wong and Lee have been viewed as the perfect couple in Malaysian badminton, but have had various rumors about breaking up.

Lin Dan became the first man to defend an Olympic singles badminton title when he defeated Lee Chong Wei 15-21 21-10 21-19 in the final on Sunday.

Now, a long-delayed banquet to celebrate their marriage beckons for the 28-year-old and his wife Xie Xingfang, herself a former world champion shuttler who took silver at the Beijing Games.

Delayed for years by his training for London, Lin Dan said that when it came together he would invite his long-time rivals Chong Wei and 2004 Athens champion Taufik Hidayat, amongst others, to the function.

“I definitely want to invite Chong Wei and Taufik and other great players.

“I don’t ask for too many gifts, just a big ‘hongbao’,” he joked, referring to the red packets stuffed with cash traditionally given at Chinese weddings. "