➤ Welcome to the weekly free forum post.  Here you'll find the week's Top 5 News Stories, any comm announcements and a list of celeb birthdays for the week.  This is also an anything-goes post.  Comment on the news, wish your fave a happy birthday or go completely off-topic, as long is it isn't against general comm rules.  Post will be made every Thursday.

✦ follow our Twitter for quick updates and join our Last FM for plenty of Chinese music recs.
✦ according to this poll with 29 votes we will no longer tag individual movies

➤ Life Of Pi Trailer Out

If there are any birthdays not mentioned here between July 22 and 28th, please let us know in the comments.

We scratched our heads in confusion when Myolie Wu rejected the idea of marriage despite her eight-year relationship with fellow TVB actor Bosco Wong during an interview with xinmsn earlier this month when she was in town to promote a TVB drama - but recent shocking news have revealed that TVB's golden couple has called it quits.

A flurry of rumours circulated after the news broke, and both sides have stepped up to shed some light on the matter.

He shared that the split was an amicable decision made together with no particular reason behind it. The 31-year-old stressed that there was no third party involved, refuting all news reports that his philandering ways affected their relationship.

Explaining that cracks in their relationship started to appear since last year's TVB Awards, he revealed that the two separated a few months back but did not break the news yet as they were considering how to best explain their situation.

When asked if he will try to win Myolie's heart once again, Bosco expressed, "(I) can't force (her), what happens in the future depends on fate."

Myolie, who attended a promotional event for her drama, Ghetto Justice 2, shed tears when discussing the split, emphasizing that their separation was not a spur-of-the-moment decision.

When reporters mentioned Bosco's promise to turn over a new leaf in order to prove his devotion to her, she quickly replied, 'Don't say it that way.' Taking a moment to collect her thoughts, the visibly shaken actress continued, 'We're all mature adults; I hope that we can calmly handle this matter in a mature manner.'

With regards to rumours that a third party led to their split, the 32-year-old tearfully shared, 'Since we've split, I cannot speak for him - I can only speak for myself when I say I did not (have an affair).'

Expressing confusion at Bosco's comments that problems in their relationship had arose since last year's TVB awards, she insisted that it was smooth sailing at the time.

Taking into consideration that the two live in the same apartment building, reports asked if she has since moved away - to which she replied, 'I haven't moved away - we don't live together and have our own homes. At this stage, I don't think it's necessary to make such a clean break.'

Asking for space, Myolie then refused further comment on her personal life.

Orange Sky Golden Harvest Entertainment Co Ltd (OSGH) 橙天嘉禾娛樂 is to remake 1999 Hong Kong romance Fly Me to Polaris 星願 (1999) (pictured) as part of a programme to revive its library of contemporary films.

Jingle MA 馬楚成, who directed the original with Richie REN 任賢齊 and Cecilia CHEUNG 張柏芝, returns to direct the new Chinese version. Production will begin in December on a budget of some RMB25 million ($3.96 million) with an all new cast.

OSGH has an outline corporate agreement with Sony and the movie will be filmed using their 4K cameras. The company says that the result will produce a better image, especially when shown in theatres that use the higher resolution 4K projectors. "It helps Sony and it will differentiate our movies and our cinemas," said Crystal Wang, company spokesman.

Wang said that the new film forms part of a 'Polaris series' that are neither simple remakes, nor direct sequels to the original film. The new Polaris will retain the theme of a human who falls in love with a ghost, but with an updated story. She described the package as "romantic and intriguing".

The company says it will produce one or two films per year, depending on script and story development. Of these some will be remakes, others may be co-productions with Hollywood companies.

Golden Harvest Entertainment Co Ltd 嘉禾娛樂事業有限公司 was one of the leading film producers in Hong Kong through the 1970s and 1980s, but sold much of its film catalogue to Star TV in 1993. That catalogue, renamed Fortune Star Entertainment (HK) Ltd 星空傳媒發行製作有限公司, is now owned by Chinese state-backed investment company China Media Capital 華人文化產業投資基金.

OSGH also detailed part of its further exhibition sector expansion. In a statement that precedes its official interim results announcement, OSGH said that it has opened seven new multiplexes in China and one in Taiwan (through its VieShow subsidiary) so far in 2012. It expects to show that gross box office takings in China have doubled in the first half. 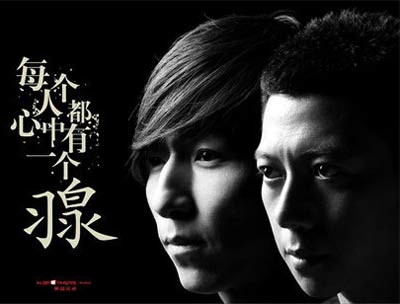 While the Beijing rainstorm caused sufferings all around with at least 77 dead so far, it also brought out the best of Beijing as many car owners lined up at train stations and airports to drive those stuck their back to their homes for free.

During the rainstorm,  Yu Quan member Hu Haiquan put out several weibo’s urging people to go out and help others in addition to notifying people the location of fellow member Chen Yufan, who was driving home but willing to drop anyone off in case anyone needed a ride.Today on weibo, a friend revealed that while he only posted info about Yufan,  Haiquan was also at the Beijing airport picking up people in need. In fact, he went to such flooded areas that the rain got in his exhaust system and ruined his new car that’s worth over 1 million RMB.

Best of luck to everyone in Beijing as another rainstorm comes and grievances to those who has already lost loved ones in the rainstorm.