Set during the warlord era, The Bullet Vanishes follows two detectives investigating bizarre murders, where the victims have been shot, yet there’s no bullet to be found. All the clues indicate that the murderer is… a young woman, that was killed 6 months before.

The film is produced by Derek Yee.

Don't recall this being posted about before and it looks really good....to me anyway lol 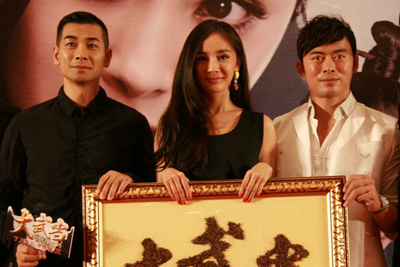 Cast members of the film "Wu Dang" (from left to right) Vincent Zhao, Yang Mi and Louis Fan promote the film at a press conference in Beijing on July 2, 2012. [Photo: CRIENGLISH.com/Handout]

The Chinese film "Wu Dang", which offers a combination of action, adventure and comedy, has premiered in Beijing.

The movie features Vincent Zhao, Yang Mi, Louis Fan and Dennis To in a treasure-hunting story similar to "Tomb Raider".

"Wu Dang" will open in Chinese cinemas on July 6.

The story is centered around the heiress of a wine production company, a poor dreamer, and their various friends . This drama will be both lead’s first starring roles. The female lead is Zhang ZiXuan (Love is Not Blind), and the male lead is of course the fabulous rapper from MIC Yao Yao!! Two other members of MIC, Jianci and Xiaoxin, also participated in the drama playing minor/supporting role.

more details about the drama here.