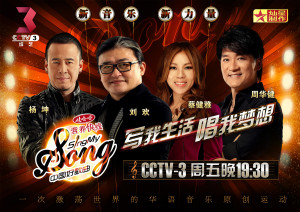 Sing My Song (中国好歌曲) is CCTV's direct rip-off of The Voice competition searching for unknown songwriters and composers to spice up China's underwhelming pop music scene. The judges are Tanya Chua, Emil Chau, Liu Han, and Yang Kun. For those of you who watched the first season of The Voice of China, you'll notice a lot of similarities: the chairs (obviously), buckets of tears, the judges going up on stage and singing the contestants, etc.

BEIJING, Jan. 4 (Xinhuanet) -- TV producers are trying to come up with more diverse, original and still-profitable shows this year.

One of the new shows, “Sing My Song,” debuted this week on CCTV. It’s about the song, not the singer. Unknown pop music composers and songwriters are featured as well as unknown singers performing their works.

The best songs are to be purchased and included in albums released by the judges, who are also entertainers. The show retains basic elements of “The Voice of China” such as blind auditions, two-way selection and battle rounds, but this time a score, lyrics and emotions are the main criteria for the judges.

“It is not a singing competition,” says celebrated mainland singer Liu Huan, one of the judge-coaches. “The appeal and market potential of the song is what matters most. The singer’s and songwriter’s vocal skills and stage presentation only play a small part.”

The other judges are mainland singer Yang Kun, Taiwan singer Emil Chau and Singaporean singer-songwriter Tanya Chua. Each will give composers advice on polishing their score for recording.

Chinese audiences love touching stories and accounts of musical dreams, so songwriters will present moving stories about their lives and what inspired them.

During the show’s first recording in Jiaxing, Zhejiang Province, judges were impressed by a young woman’s musical dream and a middle-aged bassist’s dedication to promoting the blues in China.

The woman, Jin Wenqi, and her boyfriend moved to Beijing to work and pursue music. They are among thousands of bei piao (北漂) or “Beijing drifters” who have no permanent residence or hukou in Beijing.

She wrote a song about her breakup with her boyfriend several years ago.

“After graduation, we went to Beijing with big aspirations about music but the reality was harsh. Soon we faced financial problems and could barely support ourselves,” Jin says.

Her boyfriend broke up with her because he wanted her to find someone better. “I cried and then told him through the song that I would not leave,” she says.

Bassist and restaurant owner Zhang Ling used to perform with Cui Jian, the father of Chinese rock music in the 1980s. He performed a blues song in the vernacular about life and love.

In the late 1980s, Zhang quit his rock band to study jazz and blues in Australia. Five years later he returned to China to find he had no career.

He now runs a restaurant in Beijing and promotes the blues.

“I love blues because it tells life stories of ordinary people,” he says. “It’s close to the heart.”

Coach Liu was moved to tears, saying Zhang is one of the mainland’s best bassists. “We should show our respect to such people who have devoted so many years to non-mainstream music. They may feel lonely and find it hard to move on.”

On January 19, “Amazing Chinese,” a knockoff of “China’s Got Talent,” will air on CCTV.

Unlike its predecessor, the show doesn’t focus on talent but presents the dreams of ordinary people. It has a much lower threshold for quality performances and stunts and is open to virtually everyone. It aims to be heartwarming and inspiring, appealing to many middle-aged people.

Crystal Li, a media professional who attended the taping, says the show is unremarkable. “I don’t find much originality in its positioning and format,” she says. “It tries to show the Chinese dreams of ordinary people, but ‘China’s Got Talent’ has already done that.”

“When a show is really successful in China, its format is copied and imitated again and again. Though they change the title and several details, it makes no difference. One day the audience will get bored.”


Suby- If You Believe

You can listen to the songs here on xiami: magic!

Zhou San had me in tears. I need that song in my life. Is anybody else watching?
Tags: china, singer: tanya chua, tv/drama
Subscribe