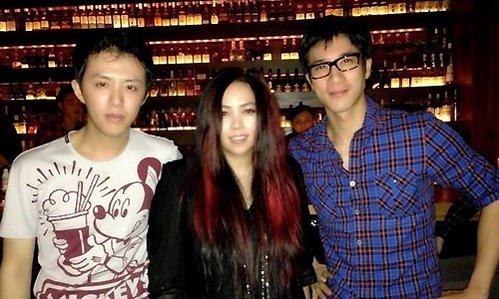 Is “bromance” in the air? Not according to state-run China Central Television (CCTV).

Thousands of fans yelled “Get together” in unison when piano prodigy Li Yundi made a guest appearance at Chinese-American pop sensation Leehom Wang’s New Year’s Eve concert at the end of 2012, fueling speculations o amour etween two of the Chinese-speaking world’s most famous heartthrobs.

Both publicly denied the rumors of anything more than close friendship and set the record “straight” on their sexual orientation, but jokes about their relationship have persisted on China’s social media.

S Lu Chen, the über-popular Taiwanese magician, made a similar joke on the CCT Chinese New Year Gala. When Li stuck out his head from behind a screen (before Lu made him disappear into thin air), Lu asked, “You are looking for someone? Looking for Leehom?”

Snickers were heard around Chinese Internet. Many called it the funniest moment of the whole Gala. Some might even have taken it as a sign o further relaxation of rigid CCTV protocols.

But CCTV did not think it was funny, not with almost 800 million Chinese people watching the show live around the world. While many social media users in China often disparage the elaborate show as gaudy and staid, watching the extravaganza remains a cherished tradition in vast swaths of the country, where attitudes towards homosexuality may not be a blasé s in urban centers.

CCTV tweeted a humorless statement on Sina Weibo, China’s Twitter, immediately after the show, claiming that Lu Chen ad-libbed the joke and that it would be removed from future reruns of the Gala. Li Yundi also said in an interview after the show that he was caught off guard by Lu’s joke. Social media users traded rumors that Leehom Wang, who also sang at the Gala, slapped Lu backstage in rage.

However, Lu also took to Weibo to defend himself less than an hour after CCTV’s statement, tweeting:

Each word spoken on stage was discussed, and was agreed upon only when each side is happy. Come on! Be honest.

Chinese Web users are sharply divided on whom to believe in this “he said, he said, they said” situation, leaving more than 50,000 comments on Lu’s tweet. Some believe that Lu is telling the truth, since the Gala is usually rehearsed to death and not one hair is allowed to be out of place. Others think Lu took liberties since he has been a Gala staple since 2009.

Only one thing is for sure: all of Lu’s magic will not be able to conjure up an invitation to CCTV’s 2014 Chinese New Year Gala.