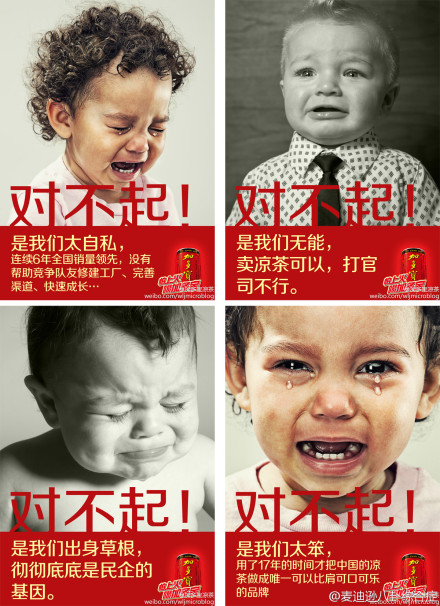 This is no tempest in an herbal tea pot. The JDB Group, the maker of China’s most popular herbal tea that raked in approximately 20 billion RMB (US$3.2 billion) in revenues in 2012 lost another legal battle n it epic trademark war ith the state-owned Guangzhou Pharmaceutical Group in late January.

Local courts and arbitration panels in China sided with Guangzhou Pharmaceutical time after time, and in late January, a court issued an injunction that threatened JDB’s multi-million dollar advertising blitz to re-brand its product. JDB believes that its opponent has been given an unfair advantage in the proceedings because it is a state-owned enterprise.

JDB decided to take the war to social media. On February 4, JDB’s official account (@加多宝凉茶) on Weibo, China’s Twitter, posted a series of four photos with tearful children. One has the caption, “Sorry! We are so useless. We are good at selling herbal tea, but not at lawsuits.” Another has the caption, “Sorry! We are too dumb. It took us 17 years to develop China’s herbal tea into a brand that rivals Coca-Cola.”

The campaign was an immediate Weibo sensation, with one of the photos being retweeted almost 30,000 times. Most commentators seem to sympathize with JDB, calling it an adoptive mother who had to give back a child that it nurtured for years.

Other corporations soon posted their imitation of the campaign. The carmaker MINI posted photos of the Fab Four with the caption, “Sorry! We keep calling The Beatles the Beetle Band in Chinese” and a collage of each Beatle in a Mini Cooper with the caption, “That’s OK! Because they all drive a classic Mini.” 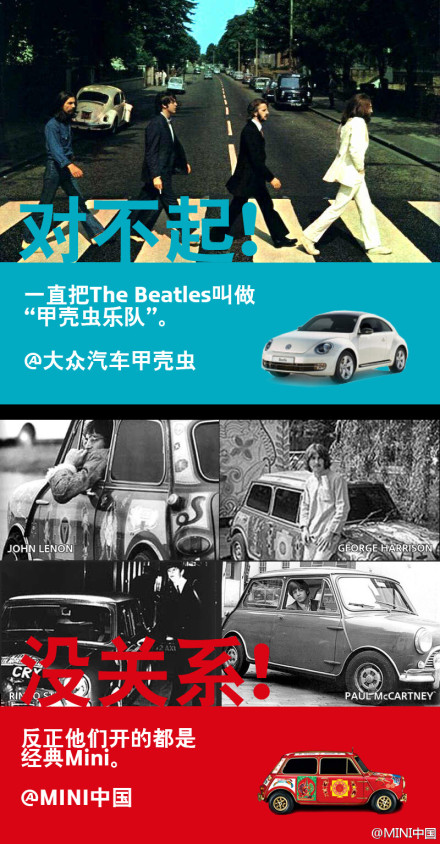