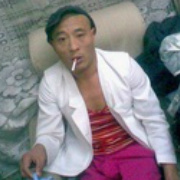 A open letter ent viral on Sina Weibo, China’s Twitter, yesterday, and it wasn’t about Obama’s inauguration. The author of the letter, popular microblogger @留几手, who we’ll simply call Mr. Liu, is known primarily for an online service seemingly modeled on the American websit Hot or Not. Weibo users, usually women, send him pictures of themselves; in exchange, he gives them the proverbial Simon Cowell treatment, most commonly doling out negative scores that follow paragraphs of harsh criticism. In his letter, entitled “@留几手 Teaches You How to Identify Good Men,” Liu has advised women to look at men from several different angles to see if they were up to snuff.

Defyin conventional wisdom in modern China, Liu does not advise his female readership to look for signs of wealth in a potential mate. In fact, the first piece of advice he proffers: avoid men wearing expensive, brand-name clothing. “80% of men like this come from money. Do you think they lack for women?” he remarks, “Look at yourself in the mirror. Are yo baifumei Chinese Internet slang literally meaning 'white rich beautiful']? If not, then you should think hard about what it is he sees in you.” Good men, according to Liu, wear quality clothes without visible branding, like those from H&M and UNIQLO.

Besides advising women to avoid men who wear too much jewelry, for fear they might be involved in organized crime, Liu also argues that men who have too many apps on their phone are bad news. “Why don’t you just buy a PSP if you like games so much,” he chides, further noting that “Men who are obsessed with Google, constantly buying 2nd, 3rd, and 4th generation products, replace their phones more often than their underwear. They’ll touch their phones more often than they touch you.” Liu also takes pain to note that a man with a Kindle is superior to a man with an iPad – for whatever reason, the popular romantic advisor is not kind to Apple.

After going on to tell women that men who do not keep an organized wallet are unlikely to have their own lives in order, Liu wraps up by saying that men who order too much at restaurants after the first or second date are wasteful and likely to cheat, while men who order competently and decisively are keepers. As a final note, he writes, “With this advice in mind, you should be able to eliminate a large number of unacceptable men. You must spend a little time to figure out those who are left, since people are all different.”

The letter touched a nerve, with users sharing it over 82,000 times. Of the more than 27,000 comments on the letter, most were praise of the author’s insight. “This is worth studying,” wrote one female microblogger. Many forwarded the letter to their friends, saying things like, “Looks like he’s writing about you!” Some even asked Liu to write a similar piece on how to find a good woman. “My [future] wife, I have no idea how to find you. I’m right here, waiting in this comment…” wrote one such man.

However accurate or off the mark this instructional letter was, its popularity shows that dating in China is still a source of great anxiety for men and women alike. Women face pressure from society and their families to find a man before they become “leftover women,” while men face pressure from potential love interests to buy a house before they marry, despite astronomically high property prices in China’s urban areas. On top of all tha the exposure of mistresses on social media s led many to believe that wealthy and powerful men are almost certain to cheat. With such pitfalls threatening on both sides, it’s small wonder that the advice of a snarky microblogger turned vigilante social critic has managed to strike a chord among China’s frustrated singletons.